In a 2016 snapchat, Banky W once said: “if or when I do get married, no way, I am doing that huge Lagos wedding”, and in a recently surfaced video, Susu had the same opinion. 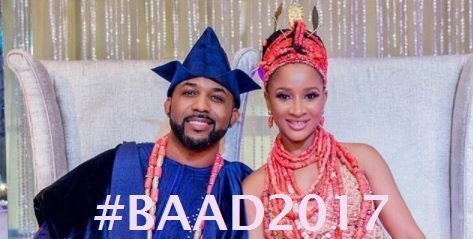 Long before the Edo bride made her entrance, Banky started the day with an emotional Instagram tribute thanking God and expressing his gratefulness for the day.

As guests – and fans – settled in following a bevy of pictures, the groom’s family made their entrance to a singing MC, then the bride’s family to the tune of an Edo-Esan cultural band.

Finally, it was the turn of 36 year old Banky and his groomsmen, including bestfriend Tunde Demerun and Big Brother Naija presenter, Ebuka.

Banky and his entourage made a grand entrance to Michael Dapaah’s Man’s Not Hot before drummings by a Yoruba band. For his first of two outfits for the night, Banky wore a royal blue agbada accessorised with beads and a Yoruba cap. 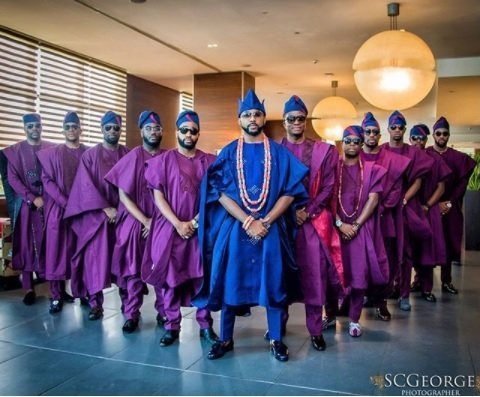 Then it was the 30 year old bride ushered in by her asoebi girls including actresses Linda Ejiofor and Nancy Isime, dancing to Kiss Daniel’s Yepa and Tiwa’s All Over.

Adesua wore the first of four outfits designed by Toju Foyeh – a boob-tubed pink fitted dress that expanded beautifully in two steps below the knee.

The look was complete with Edo’s signature marital hairstyle – an Eto-Okuku high-bun accessorised in coral head and neck beads and small gold ada and eben.

Similar to a white wedding, Adesua’s face was covered in a veil for her grand entrance, which was later removed delicately by the groom following prayers.

Post-prayer and as an officially recognised Yoruba bride, the couple exit with Adesua changing into her second outfit for the night – an Aso-oke navy blue beaded dress and gele – to match her new husband’s agbada and dance with family and guests.

The couple then exited for another change of outfit to cut the cake.

Adesua changed into her third outfit – a black Beaded laser cut with aso oke and black hair-tie, while Banky wore his second outfit by Deco 29 – a black agbada matched with a £550 Zanotti ‘Spacey’ Loafers.

Post cake cutting and closing prayers, the couple re-entered in Adesua’s 4th outfit – a black and silver mono-strapped dress with ruffle slit and outfit 3’s head-tie. Banky removed his agbada to unveil what was underneath – black kaftan and trouser.

As traditional rites came to a close, the couple had their final romantic dance before guests danced, danced, danced the night away.

The newly weds first met crossed path in 2012, but Banky W had to interest instead focused on his career. They later met again in 2015 at which point Banky recalls calling his best-friend Captain Tunde Demerun and told him ‘I’d found my next girlfriend. LOL”.

Although Banky suggests their relationship started in late 2016, sparks were evident in his early 2016 ‘Made for You’ music video, as at the same time filming for The Wedding Party movie commenced.

Having completed their court wedding at Four Points, Lagos, the couple will end their 3 day wedding with a White wedding in Cape Town, South Africa on 25th November.