They met for the first time at their wedding in Nigeria after 3 months of Facebook dating, but retired grandma, Angela is insisting CJ is her soulmate and should be able to come and live with her in the UK.

Angela who has 3 sons aged 50, 47 and 43, and 6 grandchildren met the gorgeous man back in 2015, 6 months after her second marriage collapsed. A month later, CJ, an Igbo computer engineer, popped the question via Skype. 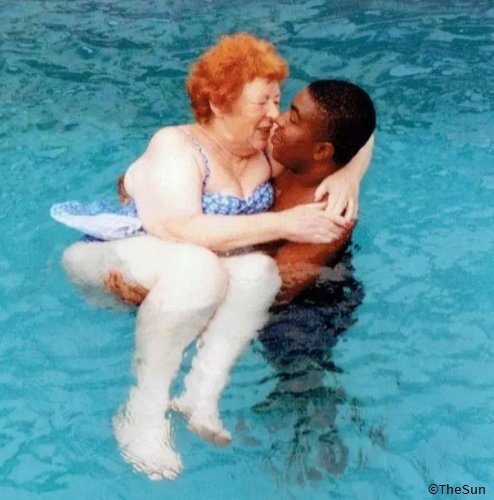 So far they have spent £20,000 (N10Million) for visas and flights back and forth, their hope now is an approval on CJ’ student visa to study masters in computing.

“After my relationship ended, I felt lonely. We had become more like friends than partners so we had decided to split.

“After being single for six months, I saw a gorgeous young man had sent me a friend request on Facebook.

“I did wonder why he had added me but I accepted and he sent me a message telling me how lovely my profile photo was. “He was so handsome, with big, brown eyes and a body to match. I didn’t see the harm in striking up a conversation with him.

“We chatted for hours about our families and hobbies. It was like we’d known each other for years. Before I knew it, we were messaging daily.

“The only problem was he was 45 years younger and lived 4,000 miles away in Nigeria.”

“He was six years younger than my oldest grandchild. But I couldn’t help falling for him.

“When I first told my son Malcolm about CJ, he was worried it might be a scam, so he checked him out online.

“After seeing how squeaky-clean his social media was, he felt he was genuine. They could all see how happy I was.

“We started chatting on Skype and I’d get butterflies when I saw his face on the computer. After a few weeks, CJ told me he had feelings for me. I was so happy.

Angela says: “I was so taken aback when he asked me to marry him. I thought he was joking. But he told me he wanted to spend the rest of his life with me.

“Of course, I said yes. He was beaming at me with such a big smile on his face. Knowing I made him that happy was all the reassurance I needed. There was such an amazing chemistry between us.

CJ had planned the whole day and had bought us both wedding rings. Sadly, none of my family could make it as it was such short notice. But I felt happy to have their blessings.

“The six-hour plane journey felt like a lifetime. I was worried CJ might not like me in person. But the moment I saw him waiting for me I knew I’d made the right decision. I gave him a hug and he kissed me.

“We’d originally planned to wait until the wedding night to consummate our relationship but we couldn’t keep our hands off each other. CJ was so loving and passionate.”

Angela said: “After the wedding, I found it hard leaving CJ. I knew I’d see him again soon but my family visa application was rejected.

“I was so determined to get him a visa I hired lawyers to fight for us. I’ve since visited him twice. 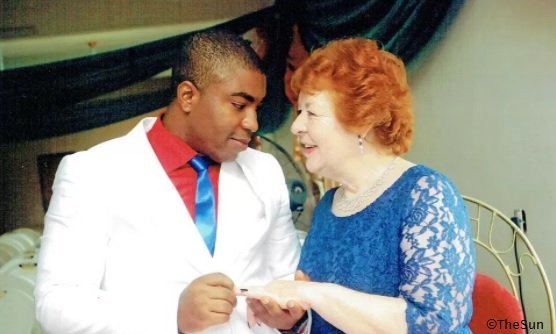 Angela was shocked when her visa application for CJ was rejected and he was denied entry to the UK.

She says: “The Visa was rejected because officials didn’t think we had financial backing, as I was retired.

“Over the following months I tried again and again to appeal the decision. It broke my heart every time it was denied. He wasn’t even allowed to visit me on a tourist visa.

“I’d waited so long for true love — and now I’d finally found it, it was being kept from me.”
“I know there are scam marriages and they get hold of older people like me. But they find out if you have money first.

I told CJ from the beginning I haven’t any money. But he told me, ‘It’s you I want’. I know it goes on and that’s why I was so upfront. I have helped CJ financially but he has always paid me back.”

She still hopes to be permanently united with him.

She says: “Our only hope now is that CJ will be allowed to come next year on a student visa to study his Masters in computing.

“I’m hoping to go to Africa later this year to visit him and I’m counting down the days until I can see him again.”

Source: The Sun: Anguish for gran-of-six, 72, as Nigerian husband CJ, 27 has his visa rejected AGAIN despite spending her £20k life savings trying to get him to the UK