Popular faces graced the 5* Montcalm Hotel in Park Lane, London, in their attires. Some looked like they forgot the memo while others outshone, bringing their A-games. Here are the dapper men and beautifully dressed women at African Pride Awards 2017.

YouTube beauty blogger, Jennie Jenkins wore a kimono styled dress to pick up her award for Make-Up Artist (MUA) of the Year.

The 29 year old Psychology graduate started her Youtube channel in 2010 to pursue her love for make-up, beauty product, fashion and lifestyle.

She may have lost out to Jennie Jenkins in the MUA category, but Edith dressed to impress in a Cobbina dress.

The former MAC cosmetics supervisor is a self-taught MUA specialised in glamming up brides.

Hardly known to miss her mark in fashion, Youtubber, Estare oozed beauty in another Missguided outfit as she picked up the Social Media Personality of the Year award.

The 27 year mum of one started Youtube in 2012, on completing a Creative Direction for Fashion course at London College of Fashion. She is best known for her vlog entries focused around fashion life, beauty, family and friends.

Once featured on Daily Mail and Channel’s ‘Blinging Up Baby’ for excessive spending on her toddler’s outfits, former glamour model, Delicia, kept up her appearances in a stand out flowery two piece ensemble by Demarie Apparels.

The 31 year old mummy of 2, is a proud housewife of driving instructor, Ken.

Oyin beat acts such as Reggie Yates to pick up the TV Personality of the Year in an unnamed emerald green.

The radio and TV presenter also known as MzSwags presents on BEN TV’s The Magazine Show.

Awilo did not fail to live up to his legendary status in his unique ensemble.

Celebrated as the man who put Makossa on the map, he was awarded the Lifetime Achievement awards for his contribution and impact on African music. 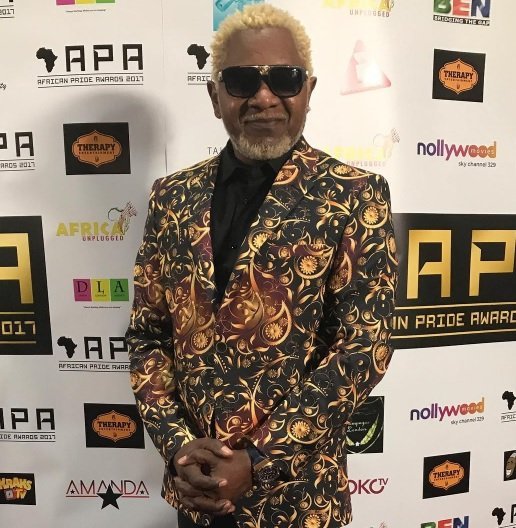 Suits are often generic for men, however these Ghanaian British instrumentalists, The Compozers, came prepared, standing out in grey suited outfits to pick up an Outstanding Recognition Award.

Like The Compozers, Ghana Boyz came suited and primedto pick the award for Dancer of the Year.

The boys made it big time when their dance routine for Runtown’s Mad Over You went viral, having only been on YouTube for 4 months.