Back in November 2016, Bukola and Nasir were announced as the Nigerian winners of the Queen’s Young Leaders Award 2017.

Fast forward to 29th of June 2017, the 2 deserving recipients received their accolades and that special handshake from the Queen at Buckingham Palace. 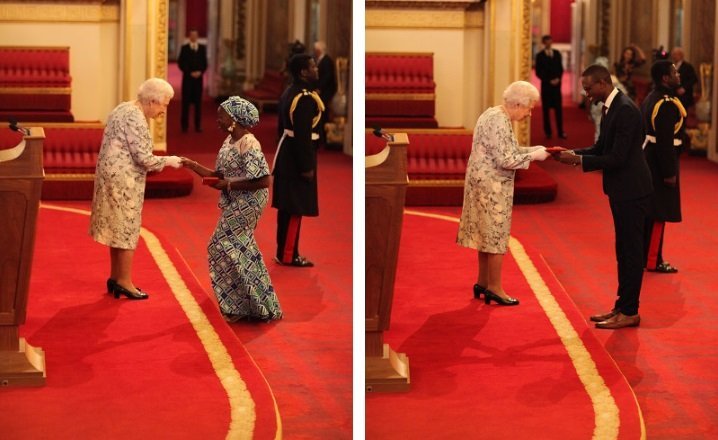 A Warwick and Leicester universities graduate of Law, Bukola could not contain her excitement as she collected her award and mingled with popular celebrities. While Middlesex educated Nasir who also became a #30under30 Forbes entrepreneur recipient courted Bruno Mars with his win on twitter.

Brain box Nasir Yammama founded a low-cost technology social enterprise, Verdant Agritech Ltd in 2015, through which farmers are taught how to access market and weather information, management skills and financial services to help produce more crops and increase their sales. As of now, with collaboration from Oxfam and GIZ, Verdant now supports 25,000 farmers.

Meanwhile, born with Sickle Cell Disease, Bukola was initially pursing a law career. An experience of blood donation shortages prompted her to join the Sickle Cell Aid Foundation in 2010 to help raise awareness, which led to launching Haima Health Initiative.

In its 1st year, Haima – aimed at attracting young people to give blood – generated more than a 1000 donors hence saving lives. Now run by a 5-man strong team including 2015’s winner – Nkechi Azinge, who gave a speech on ‘UKaid to Nigeria’ – its current mission is to register at least 5,000 people by December 2017.

Bukola and Nasir were among 10 Nigerians nominated for the award and 24 winners from Africa.