Jay Z dropped his 13th album titled 4:44 on Tidal yesterday 30th June, and guess which track has been off the hook? 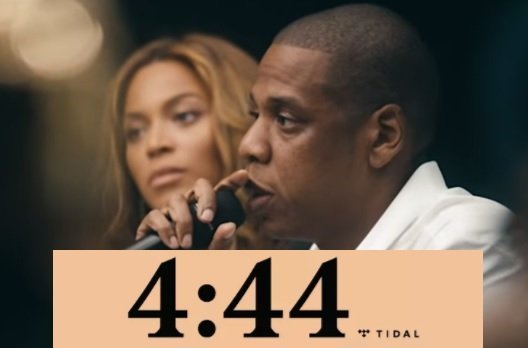 Queen Bey features on the track ‘Family Feud’, the infamous elevator fight with Bey’s sister, Solange is briefly referenced in ‘Kill Jay Z’ and an ‘unofficial will’ was declared in ‘Legacy’, but the crucifix, the oga which also happens to be the title of the album and length of the track – 4:44 – is what has got people turnt up.

With the first line of the first verse immediately after the intro by soul singer, Kim Burrell being ‘look, I apologise, often womanize’, the song is a ‘sorry’ message to his wife, Beyoncé, for being a bad boy.

The line speaks for itself – Jay Z admits to cheating regularly – which inter-links with the Solange line in ‘Kill Jay-Z’. In that song, ‘Shaun Carter’ is supposedly talking to his ego ‘Jay Z’. So while back biting Kanye, he indirectly apologises to Solange: ‘You egged Solange on, Knowin’ all along, all you had to say you was wrong’.

Back to the 4:44 track, apologising 7 times throughout, it took Jay-Z 10 years for the probability of being considerate to Beyonce to enter his head because of Blue-ivy, and an additional 5 years, now expecting twins, to acknowledge the many women he led on.

While many put downs as revealed by Jay included ‘Don’t embarrass me’ during her 21st birthday, Beyonce has remained dignified, stood by her man and put on an interesting pubic personal instead, referencing her traumas through music.

[Verse 1: JAY-Z]
Look, I apologize, often womanize
Took for my child to be born
See through a woman’s eyes
Took for these natural twins to believe in miracles
Took me too long for this song
I don’t deserve you
I harass you out in Paris
“Please come back to Rome,” you make it home
We talked for hours when you were on tour
“Please pick up the phone, pick up the phone”
Said: “Don’t embarrass me,” instead of “Be mine”
That was my proposal for us to go steady
That was your 21st birthday, you mature faster than me
I wasn’t ready, so I apologize
I’ve seen the innocence leave your eyes
I still mourn this death, I apologize for all the stillborns
‘Cause I wasn’t present, your body wouldn’t accept it
I apologize to all the women whom I
Toyed with you emotions because I was emotionless
I apologize ’cause at your best you are love
And because I fall short of what I say I’m all about
Your eyes leave with the soul that your body once housed
And you stare blankly into space
Thinkin’ of all the time you wasted in on all this basic shit
So I apologize

[Verse 2: JAY-Z]
I apologize, our love was one for the ages and I contained us
And all this ratchet shit and we more expansive
Not meant to cry and die alone in these mansions
Or sleep with our back turned
We’re supposed to vacay ’til our backs burn
We’re supposed to laugh ’til our hearts stops
And then we in a space where the dark stops
And lets love light the way
Like the men before me, I cut off my nose to spite my face
I never wanted another woman to know
Something about me that you didn’t know
I promised, I cried, I couldn’t hold
I suck at love, I think I need a do-over
I will be emotionally available if I invited you over
I stew over, what if you over my shit?

[Verse 3: JAY-Z]
And if my children knew, I don’t even know what I would do
If they ain’t look at me the same
I would prob’ly die with all the shame
“You did what with who?”
What good is a ménage à trois when you have a soulmate?
“You risked that for Blue?”
If I wasn’t a superhero in your face
My heart breaks for the day I had to explain my mistakes
And the mask goes away and Santa Claus is fake
And you go online and see
For Blue’s tooth, the tooth fairy didn’t pay

[Chorus: Hannah Williams]
I’m never gonna treat you like I should

[Verse]
Kill Jay Z, they’ll never love you
You’ll never be enough, let’s just keep it real, Jay Z
Fuck Jay Z, I mean, you shot your own brother
How can we know if we can trust Jay Z?
And you know better, nigga, I know you do
But you gotta do better, boy, you owe it to Blue
You had no father, you had the armor
But you got a daughter, gotta get softer
Die Jay Z, this ain’t back in the days
You don’t need an alibi, Jay Z
Cry Jay Z, we know the pain is real
But you can’t heal what you never reveal
What’s up, Jay Z? You know you owe the truth
To all the youth that fell in love with Jay Z
You got people you love you sold drugs to
You got high on the life, that shit drugged you
You walkin’ around like you invincible
You dropped outta school, you lost your principles
I know people backstab you, I felt bad too
But this ‘fuck everybody’ attitude ain’t natural
But you ain’t a Saint, this ain’t KumbaYe
But you got hurt because you did cool by ‘Ye
You gave him 20 million without blinkin’
He gave you 20 minutes on stage, fuck was he thinkin’?
“Fuck wrong with everybody?” is what you sayin’
But if everybody’s crazy, you’re the one that’s insane
Crazy how life works
You got a knot in your chest, imagine how a knife hurts
You stabbed Un over some records
Your excuse was “He was talkin’ too reckless!”
Let go your ego over your right shoulder
Your left is sayin’, “Finish your breakfast!”
You egged Solange on
Knowin’ all along, all you had to say you was wrong
You almost went Eric Benét
Let the baddest girl in the world get away
I don’t even know what else to say
Nigga, never go Eric Benét!
I don’t even know what you woulda done
In the Future, other niggas playin’ football with your son
You woulda lost it
Thirteen bottles of Ace of Spade, what it did to Boston
Nah, Jay Z
Bye, Jay Z