They are…slow down now, please lets get a bit of history first.

These men have all ruled – one of them still ruling – the Great Benin Empire in relatively recent times, but the Kingdom has been around way before records began – with estimates being as early as the 900s.

It was initially called Igodomigodo – meaning a nation of king makers, named by Igodo the first Ogiso (rulers of the sky) of the Empire. 31 Ogisos in total ruled between 900-1200AD during which the popular wood and bronze carvings were introduced.

Did you know Benin has its own interesting version of how the universe began?Check it out

Owodo, the last Ogiso despite many wives only had one son – Prince Ekaladerhan. Following false accusations that he was responsible for his dad’s wives barrenness, the Prince and his mum were banished.

He would later change his name from Ekaladerhan to Izoduwa (meaning I have chosen the path of prosperity) and create a settlement in Yoruba land – ‘Ilefe,’ (meaning successful escape).

Izoduwa whose name was somehow mispronounced to Oduduwa was celebrated by the Yorubas as God’s special child. He became an Ooni and refused to return to the Empire. Until this day Oonis are part of Bini culture in that they are circled by their Bini counteparts and must marry a Bini woman (leaving all other previous wives) upon becoming an Ooni.

Oduduwa would later send his son – Oranminya – to Igodomigodo, who after ruling through struggles with the Ogiamien, ran back to Yoruba land calling Igodomigodo Ile Ibinu (land of annoyance and vexation).

On his way back to Yoruba land, Oranminya impregnated an Enogie’s daughter, birthing Eweka – the first of the Oba lineage. Oba Ewedo changed Ile Ibinu to Ubini which the Portuguese mispronounced to Benin/Bini.

Between the 15th and 17th century, the empire grew at a fast rate owing to strong men led by Oba Ewuare the Great conquering and taking over lands including Lagos and costal areas as far as present day Ghana. Benin became all too powerful and structured as subsequent kings entered and conquered lands.

The Portuguese – the then powerful nation of Europe – started to do business even supporting fights during wars, and over the years, the Dutch, Germans, Spanish, French and English followed suit.

During these times, slave trade became prominent. The Binis were forbidden to be sold or taken, as a result, identification marks on faces and chests were introduced, hence Binis were hardly taken for slavery and the English called them the greats.

By the 19th century, owing to in-fighting, Benin started to deteriorate in size and power through subsequent Obas. Also by this point, threats were coming from the British who wanted to takeover their palm oil and rubber, and get rich from selling them.

Ovonramwen Nogbaisi became the Oba in 1888, and in 1897, a group of British Officials headed by Captain Phillip knowingly tried to visit Benin during the celebration of Igue festival.

The event is a special one as foreign visitors are not welcomed during this period, so Phillip and co were sent back, they refused, they were then massacred and the British declared full on war on Benin.

Over 8 days, the kingdom was burnt, destroyed and looted of its valuable artefacts. Ologbohere the alleged masterminded of the massacre of Captain Phillip and his party was trialled and hanged. Oba Ovoranmwen was dethroned, and exiled to Calabar where he lived until death in 1914. Benin was to become a subject to the British empire for the next 63 years.

Following the death of exiled Ovoramwen and still in Brtiish colonial period, Prince Aiguobasinwin Ovonramwen (Eweka II) took over until 1931. He and his son –  the next Oba – (Akenzua II) are credited with rebuilding the present day tradition and dignity of Benin Obaship, although on a smaller scale than previous times. Prince Godfrey Edokpa- Orhogbuyunmwun Aiguobasinmwin Eweka became Oba Akenzua II in 1932 following his father’ death. As part of assisting his dad to restore Benin Kingdom, he began the movement to return Benin Bronzes looted by the British during Ovoramwen’s reign.

Only 2 of the 3,000 bronzes were ever returned during his kingship. However, two coral crowns and coral bead garment, thought to have belonged to Ovonramwen, were returned to him in the late 1930s by G.M. Miller a son of a member of the Benin expedition, who had loaned the pieces to the British Museum in 1935. Prince Solomon became the 38th Oba of Benin in 1979, taking on the title Omo n’Oba n’Edo Uku Akpolokpolo Erediauwa I after his father, Akenzua II’s passing. 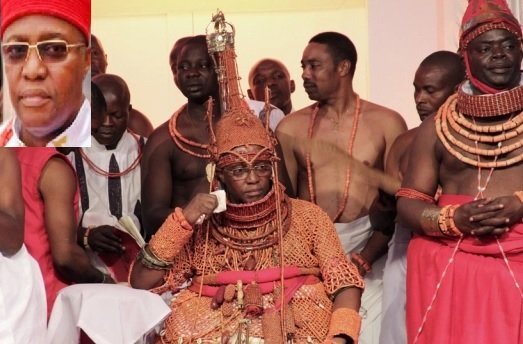 Upon finishing his secondary school, he went to the UK and US to complete his degree and masters, respectively. He became Nigeria’s Ambassador to the Kingdoms of Sweden, Norway and Denmark; the Republics of Finland and Angola. He also served in Rome, Italy and Albania.

2 thoughts on “Can you name these Obas?”