Isoken the movie is set to premiere at Leicester Square’s Cineworld tomorrow from 7pm, and its stars are arriving slowly but surely. 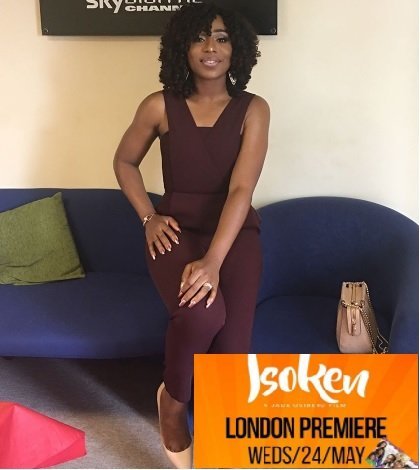 While fellow star, Funke Akindele Bello is yet to arrive, main star Dakore Egbuson-Akande arrived yesterday and attended promo duties today at BEN TV studios. The 38 year old mother of two wore a wine jumpsuit teamed up with a nude pair of shoes, bag and a Kachi hair product wig to promote the movie.

The movie revolves around 34 year old single Bini lady – ‘Isoken’ (played by Dakore) who has two married younger sisters. From family set-ups to a bad-mouthing friend (played by Funke), she faces pressure to find a partner and settle down. When she eventually finds the one, it does not start well as he -Kevin- is white (played by Marc Rhys), but does it end well?

The comedy/rom-com drama with plenty of stellar casts is scheduled for release at various Vue, Odeon and Cineworld cinemas from Friday 26th May, and from June 16th in Nigeria.

Isoken is available to watch at the following cinemas: