Last night’s episode of Britain on the Fiddle was a captivating one.

We had Micky Pitt, who smuggled duty-free cigarettes into the UK with his home-made boarding pass.

We also had the Belgium-based-claiming-living-in-the-UK benefit cheat, but nothing beats Angel Duffy, sorry Angel Jackson, oh no Paris Anderson.

Ghanian born Angel Duffy, 52, was suspected of identity fraud. As Angel Jackson, she is a disabled mum of two on housing benefits but as Angel Duffy she is fit and well with two properties.

From start to finish, Angel lies her way through starting with a claim of being Angel’s sister, Paris Anderson.

As an investigator tells her he believes she is the person they are looking for, Angel, appearing in a calm-innocentish-confused manner says she is not the one, then asks “Is somebody dead? This is just scary”.

The team whisk her off under arrest and discover she has spent over £1,000 on carpets despite being on benefits, owns English, Irish and Ghanian passports, numerous bank cards, mobile phones, homes and thousands of pounds. 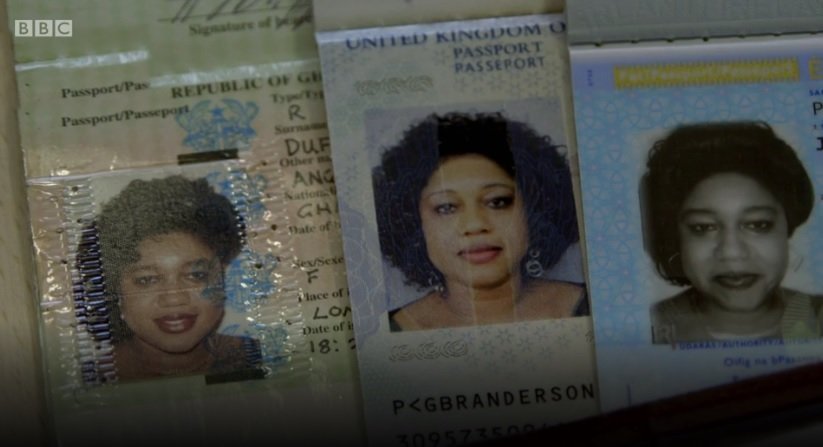 At some point, the BBC subtly show a plaque in her apartment with ‘Christ in our corner’ written on it – cheeky Christian!

They also discover sets of keys to another apartment – a  higher class from the one she was found in but Angel was to carry on digging herself into  a unique hole. When she turns up to the Police station, after bail, she identifies herself as ‘Paris Jackson’.

With the team discovering a Youtube video – titled ‘Angel Juliet Duffy – uploaded by her tenants who will also serve as witnesses and the solicitor unveiling her lies, she is hardly going to go scot free, or will she? Aside from producing a doctor’s letter saying she has ‘symptons’ of a stroke, the highlight was when she started shaking, supposedly having a seizure but two hours later she was convincing no-one and opts to become aggresive.

Angel was remanded in custody but what happens next is yet to be seen on Thurs, 9th. The full episode on BBC